In today’s digital age where most consumers know their modems from their motherboards, one might imagine that the quality of people’s passwords has improved. But a recent study shows that isn’t the case, with terrible, easy-to-guess passwords still being used by millions.

The report by the UK’s National Cyber Security Centre (NCSC) analyzed passwords found in public databases of breached accounts to find out popular words, phrases, and strings. It appears that the worst password of 2018—123456—remains the most popular, appearing in more than 23 million passwords. 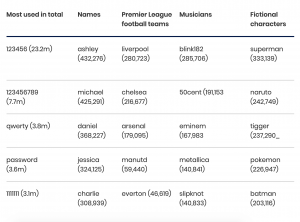 The report was put together in collaboration with Troy Hunt, the Australian security researcher responsible for the Have I Been Pwned website, which reveals if your email addresses or passwords appear in data breaches.

Most users know that it’s inadvisable to reuse the same credentials across multiple websites—even Mark Zuckerberg is thought to have been guilty of this practice in the past. Remembering multiple passwords isn’t easy, of course, so the best solution is to use a password manager such as LastPass. It’s also advisable to enable two-factor authentication wherever possible, but the most important thing is to not use terrible passwords.

“Making good password choices is the single biggest control consumers have over their own personal security posture. We typically haven’t done a very good job of that either as individuals or as the organisations asking us to register with them,” said Hunt.

“Recognizing the passwords that are most likely to result in a successful account takeover is an important first step in helping people create a more secure online presence.”

C-Forward’s President Brent Cooper, who is also serving in the role as Interim President of the Northern Kentucky Chamber of Commerce, went on WCPO last week to talk to Lisa Smith about the importance of protecting computers from cyber criminals.