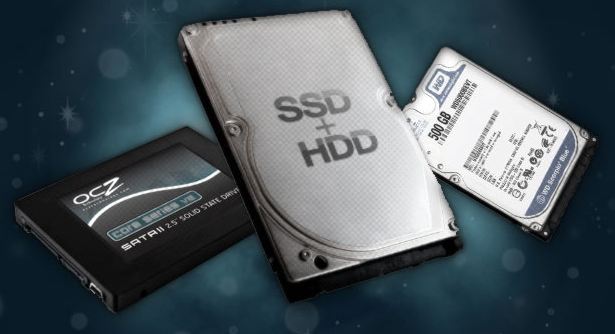 What’s appropriate for your company? We’re getting really good feedback about the solid state drives in ultrabooks. With no moving parts, they’re fast and reliable.

Solid-state drives (SSDs) are expensive and hard disk drives (HDDs) are slow. Now that you can buy a hybrid of the two, there are a lot of choices with varying costs. Which type of drive is my best bet for the money?

The best drive for your money is going to depend on your needs. You essentially have four options, and which one suits you best will depend on how much you’re willing to spend, how much storage space you need, and how much you value speed. Let’s go over these options and see which drives suit you best.

Case #1: Cost Is Irrelevant, I Have Small Storage Needs, and Speed Is Paramount

If money doesn’t matter and your storage needs aren’t significant, an SSD is the way to go. We’ve frequently argued that it’s the best upgrade you can make in terms of boosting the speed of your machine, and that hasn’t been understated. Although SSDs are expensive, a 256GB drive will run you just a little more than $1 per gigabyte and is a worthwhile investment.

Case #2: Cost Is Irrelevant, I Have Large Storage Needs, and Speed Is Important

If you need a lot of storage, have plenty of money, and require a pretty high amount of speed, you need to get yourself an SSD and a hard drive. This is usually a pretty simple solution for people with desktop computers, as they can pick up a small SSD to hold their applications and system files while utilizing a much larger hard drive to hold everything else. Because system files don’t necessarily take up a ton of space, you can easily survive on a tiny SSD if your other hard drive has enough space.

Laptop users will have a harder time, as most laptops only have a single hard drive bay, but if you don’t need your optical drive there are ways to install an SSD in its place. Most laptop users will have to make this sacrifice to use both, but if the optical drive is important you may want to consider just supplementing your SSD with an external drive. My laptop has a 256GB SSD, and that’s enough for pretty much everything I use on a regular basis, but I keep a 500GB USB 2.0 drive handy for editing video and handling other large files that don’t need constant storage on my primary disk. A combination of the two types of drives works well, whether they’re both internal or one drive stays outside of your machine.

Case #3: I’m on a Budget, I Have Large Storage Needs, and Speed Is Irrelevant

If you need a lot of storage and don’t have much money, the easy answer is to pick up a standard hard drive. They’re still the cheapest option out there and you can get a long of bang for your buck. If you can afford it, spend the extra money to pick up a 7200RPM drive with a large cache. This will gain you a little additional speed and shouldn’t cost too much more.

Case #4: I’m on a Budget, I Have Large Storage Needs, and Speed Is Important

If you want the best of all worlds, you’re not going to get it. There really is no perfect compromise. That said, there is such thing as a hybrid drive that contains a small SSD (around 8GB in most cases) used to cache frequently used files plus a large standard hard drive that provides the actual storage. These drives do come at a premium over traditional drives, but they’re far cheaper than most SSDs. The disk space you’ll gain over an SSD for the same money is also enormous. Basically, if you need to store a lot of files and still get a speed boost on a budget, a hybrid drive is the way to go. That said, you should know you’re not getting an SSD. In many cases the drive will perform like a hard drive because that’s what it is, primarily. So long as you set your expectations realistically, you should be pleased with the results.

Currently there are not many hybrid drives available, as the technology is pretty new. I believe Seagate was the first company to bring these drives to market, and so their offerings have been around for a little longer. You can pick up one of their 750GB hybrid drives for about $170. That’s a $70 premium for the 8GB SSD. OCZ also makes a 1TB hybrid drive that installs into a PCIe card slot, but these are not well-reviewed and cost quite a bit more. You definitely pay a higher premium for the SSD component with hybrids, but if you need that extra storage and only have room for a single drive they are the way to go.

Hopefully someday soon we’ll be in a place where SSDs are cheap, big, and the norm in most computers. Until then, you’ll have to compromise something but one of these compromises should work pretty well.