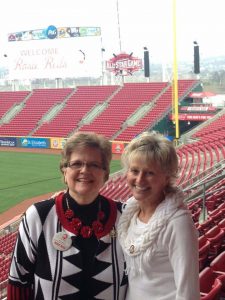 Our very own Dale Silver has been announced as the 2016 Rosie Reds’ President!

The organization is 3,000 members strong.  The Rosie Reds Philanthropic Fund is supported by dues, fundraising events and donations.  The Rosie Reds award annual endowments of $3,000 each to nine area college baseball programs and $4,000 to the Powell Crosley Jr Kid Glove Organization.

When Brent Cooper, C-Forward’s President was asked about Dale’s newest role, he responded, “Everyone at C-Forward is VERY proud of Dale and her ongoing commitment to the community.  I’ve never met a more passionate business leader, or a bigger Reds fan!  She is going to do a wonderful job for the Rosie Reds!”