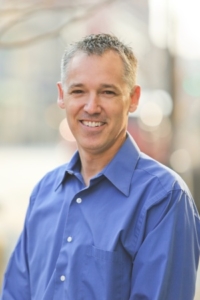 Bryan Cobb is a Network Engineer for C-Forward. He spent 15 years as the IT/Facilities Director at the Northern Kentucky Area Development District (NKADD) transforming it into one of the most technologically advanced Area Development Districts in the state of KY.
Bryan is a graduate of Northern Kentucky University with a BS in Computer Science. He is also a graduate of Leadership Northern Kentucky 2013 and currently sits on the Leadership Education Day Committee. In 2012, Bryan started New Haven’s first father engagement program at New Haven Elementary called, “Tiger Dads” which currently enlists over 300 father figures.

Bryan also serves on the NKY MakerSpace Steering Committee and was a Cub Scout leader for 4 years.
He enjoys being outdoors, playing golf, snow skiing and home improvement projects, but most important, he likes spending time with his wife and kids. Bryan and his wife Cristina currently reside in Union, KY with their two children Zachary and Avery.