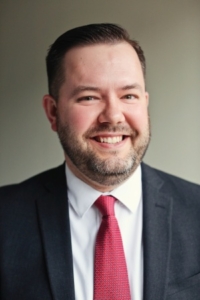 On average in the United States, an IT person stays with a company for less than five years. C-Forward boasts an over 95% retention rate every year with over half of the company being on the team for over a decade! One of those responsible for the wonderful culture is C-Forward’s President, Brian Ruschman. Ruschman has been with the company since March of 2006. First starting out as a Network Technician, he then grew into a Sales Manager, then Vice President, and now President 15 years later! Ruschman says that even though he is not a sales manager anymore, he still focuses on sales and speaking with businesses about how C-Forward can help achieve their goals through technology.

Ruschman describes C-Forward as a positive work environment for everyone stating, “C-Forward strives to bring a high level of trust and camaraderie; to be a part of the team… We foster a team atmosphere, working together to achieve a common goal which is the best support for our clients.” Ruschman also adds that one of his favorite events he attends for C-Forward is the Consumer Electronics Show. He states, “The Consumer Electronics Show is a highlight each year. Major manufacturers use the conference to debut their new solutions for that upcoming year. I was also able to take part in the Tuscany trip with the Northern Kentucky Chamber of Commerce, networking with others from the region in a relaxed atmosphere. I highly recommend these yearly excursions!”

However, Ruschman says that his favorite part about working with the company is the people. He says, “I truly enjoy speaking with people about how they can improve their business and how technology can get them there. It’s a big part of my job to listen to business leaders about their pain points with productivity or a certain software package. We then discuss with them about how different IT solutions can be implemented to increase productivity and have happier employees. Achieving that piece is my favorite part about working at C-Forward.” He also specifically shouted out Mike Grout, Senior VP and Chief Operating Officer, as someone who has done “a terrific job adding stellar resources to the team!”

Brian Ruschman has been an incredibly valuable part of the C-Forward team for over 15 years and we cannot wait to see what he accomplishes in the future.