C-Forward, Inc. began in Fort Thomas, Kentucky with a big idea – to bring “Big Business” IT solutions to small businesses in the Greater Cincinnati/Northern Kentucky area. 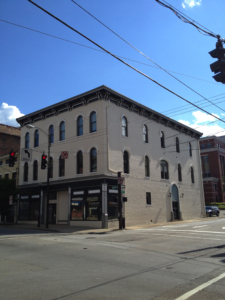 Prior to starting C-Forward, Inc., in 1999, founder Brent Cooper had worked for large organizations and realized small businesses were not being offered the same quality network services or state of the art IT solutions that large businesses enjoyed.  He wanted to change that.  In the first years, after hiring Scott Johnson, the company was able to assist clients in developing their computer networks to an extent they had never before experienced.  In addition to creating reliable networks, C-Forward Inc., provided customers with secure firewalls, e-mail, database, and remote access solutions.

C-Forward’s “can do” attitude and troubleshooting tenacity built customer loyalty.  Satisfied C-Forward, Inc., customers spread the word about the great service and this word-of-mouth marketing enabled the company to achieve an average of 50% growth, each year, during its first three years in business.  Tremendous growth and outstanding quality work propelled them toward earning their first award in 2003, the ”Northern Kentucky Chamber of Commerce Small Business Success Award”.  This was the first of many awards they would receive, and the exposure from the recognition continued to drive future growth.

MAKING IT ALL WORK TOGETHER

C-Forward celebrated 20 years in business in 2019. They have continued to average 22% growth per year. C-Forward, Inc., has been named an Emerging 30 business by the Northern Kentucky Chamber of Commerce 5 times, one of Cincinnati’s top 25 IT Consulting firms 4 times, one of the world’s premier Managed Service Providers by Channel Futures 501 and a NKY Chamber Business Impact Finalist in 2020. C-Forward’s growth continues today as our support capabilities expand.

HOW DID C-FORWARD GET ITS NAME?

Many people have asked this question over the years.   Does the “C” in C-Forward, Inc., stand for Cooper (C-Forward’s Founder)?   No, the “C” in C-Forward actually stands for Computer.   When the company was created in early 1999, it was apparent that the Information Technology (IT) business was always going to be in a state of flux.  Change was going to be a fact of life.   Computing in the future wasn’t going to look like computing of the past.   In the 1980s personal computers worked off of floppy disks.  In the 1990s, Novell servers were in use in 80% of the networks in the U.S., but by 1999, Microsoft had taken over.  Things change.    So when picking a name, the idea was to pick something that people would remember, but also something that would fit with the ever changing world of computing.   After sending out a number of possible company names to friends and family, the majority of people liked the name “C-Forward” with the slogan:  “Helping you Look Forward to the Future!”.     As it turned out, C-Forward has been a great name!   As the IT path has changed over the years, C-Forward has adapted and helped it’s customers navigate the way.